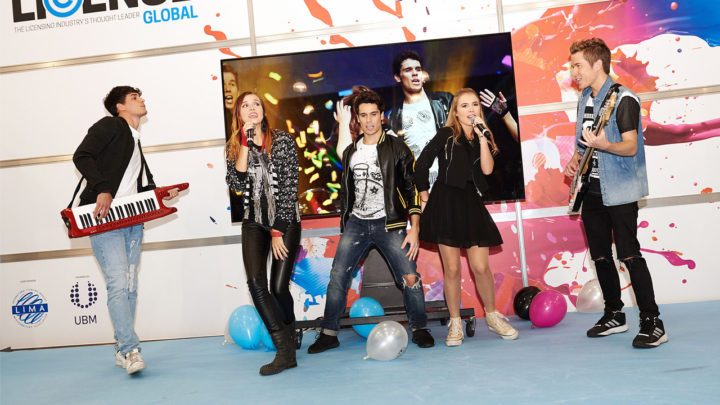 A host of leading industry figures gathered at the Brands & Lifestyle Live Stage on Tuesday night for a highlight of BLE 2017 – a glittering ‘rocktail’ party featuring some very special guests: the rising stars of hit show Maggie & Bianca Fashion Friends!

The series has taken the world by storm, and thanks to its growing success three seasons have now been made, as well as two TV movies  and two music CDs from Sony. The show reaches millions of fans  through TV broadcast in Italy, Russia, Brazil, France, Germany, Greece, Poland and Benelux, and on Netflix worldwide. The Moodboards – the band from the show formed by Maggie, Bianca, Jacques, Quinn and Edu – have also started a live tour  in October 2017, with dates in many major Italian cities.

The show’s popularity has led to a rich and developing licensing programme, designed to respond to market demands and already including licensees across various categories. Important multi-territory deals have been signed with Simba Dickie Group (master toys), Panini (sticker album and trading cards), Ravensburger (puzzles) Denver (bicycles), and Procos (partyware), as well as an international deal with Sony Music Entertainment.

The event, held in partnership with Brand Licensing Europe, saw guests enjoying the fantastic music of The MoodBoards, who performed live! The band brought all their energy and positivity to the stage and then posed for photographs with guests.

The presence of Maggie &  Bianca Fashion Friends at BLE is the first step of a promotional tour that will see the cast travel across Europe.