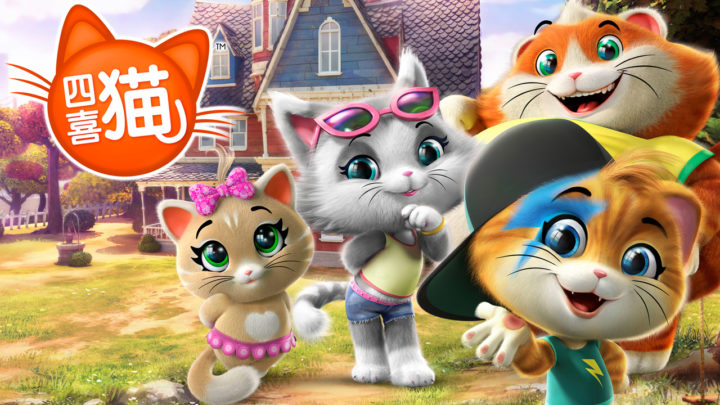 Rainbow recently launched its animated hit 44 Cats on CCTV 14 China, and ratings have already established it as a leading show on the channel.

Starting from February 4, 44 Cats has been airing daily on China’s major kids content channel. The 52 x 13’ preschool show follows the daily adventures of Lampo, Milady, Pilou, and Meatball – four adorable kittens living in lovely Granny Pina’s house and playing their songs as a music band named The Buffycats. Always ready to help their friends finding creative solutions to any kind of problem, the Buffycats are conquering broadcasters across the globe thanks to their cuteness and universal attributes, their stories dealing with central themes such as tolerance, diversity and altruism, and their unique way of combining positive values, action and comedy in a sophisticated CGI production. Distinctive feature of the show is the wonderful music score, made up of original songs from the Italian tradition, developed and sung by the famous children choir of the Antoniano Bologna.

“We are really proud that 44 Cats has reached the Chinese audience with its positive values and entertaining adventures”, commented Iginio Straffi, CEO of Rainbow and creator of the series. “We are confident that the audience will appreciate the passion and dedication we put in this show”.

44 Cats keeps growing meowtifully, and on the licensing and CP landscape the brand is gaining rising popularity across the world. Guangzhou Art-land Holding Co. Ltd. is consumer product agent for the brand in Mainland China, Taiwan e Hong Kong.

Rainbow’s explosive mix of music and comedy is ready to charm the Chinese audience, while a second, enthralling season of the best loved cat friends team on screen is already in production.